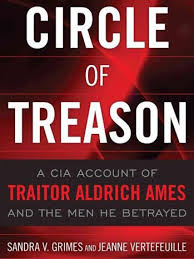 Cold War consequences remained high from the end of World War II to long after the fall of the Berlin Wall. For some, the price of being captured meant prison time, public trials, or for some, torture and execution by being shot in the back of the head.

The authors of the book,”A Circle of Treason“, Sandra Grimes and Jeanne Vertefeuille, started their careers in the CIA in 1967 and 1954 respectively.  The authors give a detailed account of their lives in the CIA.  Each started out as Administrative and Intelligence Assistants and advanced to the level of station and branch chiefs.

The book is exactly what the subtitle states, “A CIA account of the traitor Aldrich Ames and the men he betrayed.”  The authors produced a book that details the inside story of how the agency caught one of its own spies, Aldrich Ames.   What can’t be denied after looking at the evidence  is Ames’ dishonesty, lack of integrity, avarice and betrayal to the people he swore to protect.

Aldrich Ames, according to the authors, caused the deaths of many CIA assets who were vital to the security of the United States at a time when both countries had nuclear weapons and not that much command and control over them. The task force investigated Ames the detailed information on bank accounts and meeting they found led to his arrest in 1994.  So why take this long to write the book.    The authors let the readers know up front that their work was vetted and scrubbed by the CIA’s Publications Review Board so nothing in the book compromises security.  The CIA review process took three years. Between that and the insistence that the book be accurate gave the book a published date of 2013.

The book covers the history of the team, the authors’ careers and how each arrived at the table of five principal investigators with the mission of trying to find out why their CIA assets were being systematically identified, called back to Moscow, tortured for information and executed.  The years long investigation was tedious and frustrating but the Grimes and Vertefeuille continued their dogged pursuit eliminating a group of people to get to the only one they determined could be the mole that gave up their people.

The book makes clear that it is not enough to accuse someone of spying and being a mole for America’s adversaries but an agency has to have proof.  Proof that can hold up in court.  This means having dates, times, documents, video and audio if possible so that when an officer or agent arrest the person that person pleads guilty or there is a conviction.  The book covers that and includes instances where Ames was given his own office so that the agency could hide a camera to get more information for their case.

What is particularly chilling is how Ames sells out his people for money and nothing else.  The authors give their Soviet assets a human form by covering their backgrounds, their families and revealing why they might have chosen to spy for the United States and rather than be loyal to the communist regime.

The internal political issues and personality clashes hindered the process as it moved along.  As an understatement, these problems are systematic of the Washington, DC, area government offices in general.  It is a testament to the group that they stuck with their mission of identifying the traitor.

The book is highly recommended for getting the inside story from two people who actually were there and understood the process and why it took a while to capture on of their own.  In the aftermath, many people didn’t get proper recognition for sticking with the investigation.  This book outlines who the primary heroes in this case and who in the bureaucracy set out to place blame and take credit where credit wasn’t due.

These two highly skilled professionals and authors fall into the heroes category but they are professionals and getting the man who betrayed so many people was enough.  This book opens the building cipher lock doors, walks by the badge checker to the rooms where daily CIA operators work so the reader can find out how they caught their mole.  It doesn’t tell you everything but it is as close as the public will get.