When determining when the horse and carriage stepped aside for the automobile, you can point to accessibility and price. When innovators like Henry Ford figured out how to produce automobiles on an assembly line and still keep quality, this produced a product in 1908 that was sold for around 825 dollars for the Ford Model T. Affordability meant that the buying public could get one and that Henry Ford could still keep a hefty profit margin and by equation produce more jobs with enough salary to buy, you guessed it, more automobiles.

However, as Orson Welles’ film, The Magnificent Ambersons, points out in a side story in the movie, you still have to get the buying public to change what they have become comfortable with using for the past several hundred years. The movie is set at the turn of the 19th Century as the automobile is gaining popularity. Some see it as a fad and others see it as a the beginning of new era. 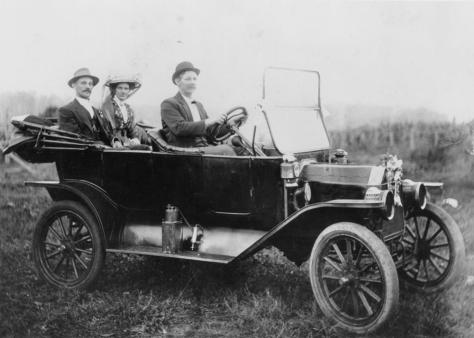 As Joseph Cotton, who plays Eugene in the movie, states during a conversation, “With all their speed forward, they may be a step backward in civilization? It may be that they won’t add to the beauty of the world or the life of men’s souls. I’m not sure. But automobiles have come. And almost all outward things are going to be different because of what they bring. They’re going to alter war and they’re going to alter peace. And I think men’s minds are going to be changed in subtle ways because of automobiles”

He could be speaking about many inventions over the years. The buying public has proven over and over again that if it is affordable and it makes your life easier then customers will buy it and buy it again.

The introduction of the personal computer bore this theory out during the last 35 to 40 years. Some people were reluctant to buy a computer either because of the price or rationalizing that they were fine with the typewriter and paper copies. Soon, innovators in the industry proved that the personal or office computer could make your life easier, if not more exasperating when it breaks, most of the time. Soon, the ability to save thousands of documents on a hard drive and research information for something, like say, a blog, or even a college paper, made the desktop and laptop the latest era of the golden age of inventions. It happens throughout history all of time. However, that doesn’t mean, you can’t go back in time and experience what our ancestors experience. For example, for a long time I kept a typewriter on hand just in case this personal computer thing didn’t work out. Not really, but I do still have a turntable along with my I-Tunes. I just like the way Motown sounds on an LP, that stands for Long Playing by the way.

Another way to use the way back machine, is take a trip to Charleston, SC. (In an automobile)

Charleston, SC, offers visitors a number of opportunities to examine the city’s historical architecture and other significant sites. You can see revolutionary period homes, civil war architecture, and the aircraft carrier, USS Yorktown. One of the best ways to get a start looking around the city remains a carriage ride. The carriage-the way our ancestors moved from one town to another just a short century-and-a-half ago. It’s an hour ride that takes your around the central area of the city.

One of the many horses that pull site seers around is Sammy. Sammy came from a Northern Amish community. He worked on a farm for most of his life and from what our tour guide told us during the tour, this is a break for Sammy from farm work. His schedule for Old South Carriage Rides is generous. He works for a few days in the city and then he is taken out to a farm to relax for a few weeks.

As its website states, “Old South Carriage Company operates a 65-acre plantation, Sugah Cain, on Johns Island, 8 miles from our stable. For 2-3 months annually, our beautiful horses are free to run in large pastures or leisurely graze under century-old live oaks.”

On Sammy’s trip this time he took 16 people. He maneuvered around traffic, pulled over to let traffic go by, threaded the needle on tight turns that would make a bus driver envious, stopped when the tour guide asked him for people in his carriage to take pictures, and performed at a high level of excellence.

At the end of the tour, Sammy gets to rest, have a drink (picture above), maybe eat if it’s time, and wait. If you are visiting Charleston, SC, visiting the historical sites and looking at the architecture is worth of the trip.   However, having Sammy or any of the other horses from the Old South Carriage Tours gives you a lasting memory to take back with you also.