Before the people voted Andrew Jackson President, he was a lawyer, self-made business man and a commanding officer and general of a United States military unit.   The book “Andrew Jackson and the Miracle of New Orleans” with the subtitle, “The Battle That Shaped America’s Destiny”  by Brian Kilmeade and Don Yeager concentrates on a short time period in  Jackson’s career but important to his future nonetheless.  The subtitle concerns the vital geographic New Orleans port and the Mississippi River in that they were both vital to westward expansion.  The outcome went a long way toward the United State’s goal of forging a strong voice in international relations.

This is the third book by the co-authors.  The others, “Thomas Jefferson and the Tripoli Pirates”, and “George Washington’s Secret Six” used the same strategy as this one, zooming in from a satellite’s view of America’s history and the Jackson legacy to give the reader a pinpoint, telescoped examination of an important battle at the end of the War of 1812 with Britain.  These short, 200 or so page books will not give a reader a wide sweeping view of subject but a slice in time or an event important to the United State’s history.  The authors are putting together the history puzzle one piece at a time.

Jackson’s personality and leadership style brought results.  The book shows how Jackson, without any formal training, intuitively understood battle tactics and how to use the terrain to his maximum benefit.  He could make decisions in the middle of a battle but took advice when it was clear someone else in the command had a better idea, and that included the suggestions of a privateer or pirate, depending on one’s  assessment, Jean Lafitte.  He understood how to motivate his men and how to relate to the people of New Orleans during social functions. 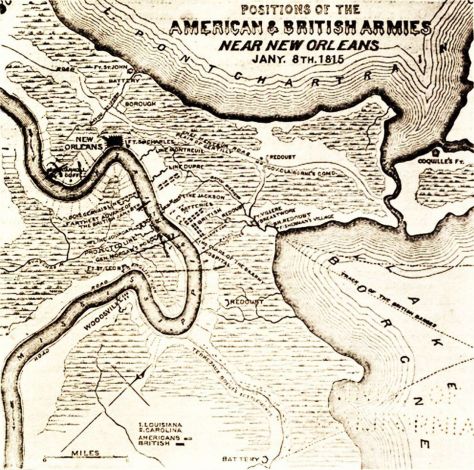 The authors do a good job of outlining the British plan of attack leading up to the Battle of New Orleans.  The British commanders made several mistakes at the beginning that helped Jackson’s cause.  However, Jackson’s ability to forecast the British Navy and Army’s avenues of attack was as much a factor in the victory as was the British commander overconfidence in taking on solders, Native Americans, Pirates and volunteers from several states in the area.  It was a mixed recipe of anyone Jackson could muster but General Jackson made the Army a personality of one, his.  That personality was tough, resourceful, with a boiling and deep hatred of the British Army from his childhood years due to events that caused the death of his family members.

The books also gives detailed descriptions of the swampy lands in the bayou that both sides of the war had to maneuver through to build defenses and a launch point for an attack.  The challenges presented by the New Orleans terrain was in contrast to the problems the diplomatic team had in Britain when negotiating a truce.  The snail’s pace communication presented difficulties in know who had the upper hand when ironing out details of a peach agreement.  They didn’t want to negotiate a peace with New Orleans in British hands. For as the book points out, the New Orleans port and control of the Mississippi River was key to America’s Westward expansion and a victory over the British invading force for a second time meant increased prestige to the World’s countries looking on a young United States.

4 thoughts on “Book Recommendation: Andrew Jackson and the Miracle of New Orleans”