As Egyptian Queens go, my favorite is Nefertiti, a name meaning “A beautiful woman has come.”

In spite of preferences, there was another queen that gets most of the headlines and movie titles.  She would be Cleopatra.  It’s interesting to note that Cleopatra as a movie role has been taken on by many actresses.  She might be the most attempted historic role attempted by actresses, other than Queen Elizabeth I and the current Queen Elizabeth, since the first frame of celluloid was run through a projector. It’s interesting to compare how actresses interpret one personality in history.

The portrayals that stand out in history are delivered by Theda Bera, Claudette Colbert, Vivien Leigh, Sophia Loren and Elizabeth Taylor.  Other actresses have also attempted Cleopatra such as Monica Belucci but I want to concentrate on the five.

The Face of Cleopatra? Find out.

Cleopatra was of Greek Macedonian heritage but quickly learned the Egyptian language and identified with the Egyptian culture. This effort endeared her to the Egyptian people. She was a shrewd politician who maneuvered her way to be the sole ruler of Egypt. Empress Catherine the Great, who ruled Russia in the 1700s, followed this example by learning the Russian language early on in her education and immersing herself in the Russian culture when she came from Prussia to marry the future Peter III.

The comparison among the five portrayals of Cleopatra is an interesting exercise but for the time they were released they were all noteworthy. 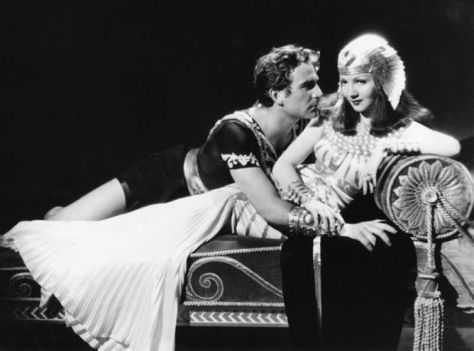 Claudette Colbert appeared on-screen in “It Happened One Night” and “Cleopatra” in the same year, 1934.  She showed some range that year.  Colbert had to have the look for Cleopatra but also at that time a speaking voice that recorded well for the movies. During the transition from silent film to “talkies” many actresses and actors were left behind due to poor speaking voices or voices that didn’t match their appearances on screen.  She had both, the look and the voice, and her portrayal shows it in the strong personality she shows on film in the Cecil B. DeMille production.  Cecil B. DeMille knew how to stage an epic. Although this film is shot in black and white, the pageantry of it competes with epics of today,  Colbert, however, takes over the screen next to her co-stars and displays a strong national leader from the beginning to the final frame.   In a nod to her hitchhiking scene with Clark Gable for “It Happened One Night”, she essentially did the same thing for Julius Caesar and Mark Antony as they applied their brakes to their horse and carriages to court Cleopatra.

If Vivien Leigh can seduce Rhett Butler, she can certainly do the same with Julius Caesar.  Although she has the look, she is not an actress that you think about when considering for the role of Cleopatra. She seems to play the part more playfully than being a tactful political rival and nation ruler. Leigh’s Cheshire cat smile seems to take away from cunning and ambitiousness.  Leigh does an admirable job as well as the supporting cast, especially Claude Rains as Caesar, but it is not the best of the lot.

This Italian film is more famous for Sophia Loren playing Cleopatra and the dual role of the slave girl look-alike who tries, with help, to make her way into the royal palace pretending to be Cleopatra.  It’s more of a comedy than a serious epic but Loren as Cleopatra is intriguing.

Elizabeth Taylor’s Cleopatra is perhaps the most well known or notorious of the actresses depending on your point of view.  The film’s cost over runs due to production problems, actor’s salaries and the cost of building the sets ballooned the budget from 2 million to some reports say 44 million, and that’s 1963 money. Contrary to popular opinion, it wasn’t a disaster it eventually made money and garnered 9 Academy Award nominations.  The on-set romance between Taylor and Richard Burton notwithstanding, Taylor’s version of Cleopatra rivals that of Claudette Colbert in its sexual nature and she portrays Cleopatra as a political figure and manipulator.  She captures the film the moment she rolls out of the carpet.  At that time, she was as powerful in Hollywood as Cleopatra was in Egypt and her 1 million plus salary proved it.   Despite the negative publicity it remains an epic to this day.