Marine Corps Major General Smedley Butler was a warrior in the truest sense.  He had two Medals of Honor (MOH) to prove it. Born in 1881, he joined the service, got his commission and earned his MOH in Haiti and Mexico. He rose through the ranks through hard work and a big helping of Marine Corps spirit. After serving in the Marine Corps for more than 30 years in a variety of assignments from platoon leader to commander and finally staff positions, he retired from the Marines with a stellar record.

Once he was out of the service, he was free to think and write what he wanted. He came to the conclusion that “war is a racket.”  He really dropped a mortar round into the establishment with that one.  He wrote a book that outlined how companies working with government increased their profits during wartime.  His point that corporate profits are made from wars that costs the lives of young people resonates to this day.  He was way of ahead of his time railing against the “Military Industrial Complex”.

As he wrote in his book, “War is a Racket”, a racket is an inside game with only a few people knowing the rules.  A racket exploits many people for the personal gain of few.  He was right and continues to be correct is this assessment.  Servicemen pay the price for diplomatic screw-ups by waging wars that are decided in secure, closed rooms only accessible to the power-elite.

He died of cancer on June 21, 1940 railing against the machine but proud of his service in the Marine Corps. 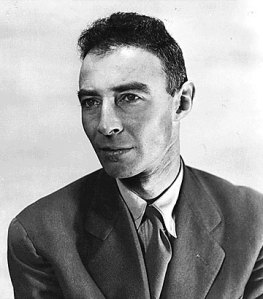 J. Robert Oppenheimer’s life may seem like a polar opposite from General Butler’s but each traveled a similar path to get to the same intellectually.  Oppenheimer spent the majority of his younger days matriculating through universities and then working in research labs.

He went from being the driving force in building and testing the atomic bomb in Los Alamos, NM, to lecturing and lobbying against the use of globally destructive weapons.

He was appointed Chairman of the General Advisory Committee to the Atomic Energy Commission after it was formed in 1947.  It was from this position that Oppenheimer began lobbying for international arms control in addition to his responsibilities for advising on nuclear issues and other areas such as funding and the building of laboratories.

His lobbying efforts toward scaling back of the production of global destructive weapons was both an intellectual and practical decision. He felt that too many civilian lives would be lost when hydrogen bombs were used and he also thought that the development technology needed to be better.

Oppenheimer’s was continually wrestling with the advancement of science and the political and military use of those breakthroughs. Oppenheimer wanted the government to be careful about how and if the bomb was used again.  His public views on the subject cost him his security clearance and therefore his position on the advisory committee in the fifties.

After losing political power, Oppenheimer used his position to lecture and publish articles on science and his views on atomic energy into the sixties. He died of cancer on February 18, 1967.

General Butler and J. Robert Oppenheimer were people who did a job they were trained to do when they were called upon.   They were smart, intelligent people who took their thoughts, based on first hand experiences, through to conclusions that were so alarming that they were compelled to act positively, despite the consequences.   Both General Butler and Dr. Oppenheimer encountered backlash from the government, their peers and public opinion.  For that courge they deserve merit it would have been much easier to nothing at all.